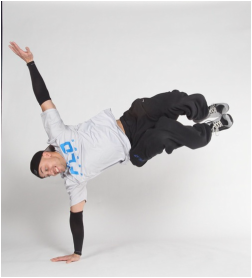 Chris Flo - Owner
Chris started training in his parent’s basement when he was 15 years old. He developed a passion and love for training others and witnessing not only the physical transformations he was facilitating, but the changes in their overall lives while training with him. He received his initial personal training certification through W.I.T.S. in 2001 and was hired at Work Out World. While at Work Out World, he became a certified personal trainer through the National Academy of Sports Medicine and attended Kean University for Athletic Training. He graduated from Kean University in 2008, and accepted the position of Assistant Athletic Trainer at Westfield High School where he immediately connected with and impacted young athletes lives both on and off the playing fields. He continued to work part-time at Bally’s until the restrictions of the corporate gym pushed him to his breaking point, and he dove head first into opening FLO FITNESS LLC in 2009 with the vision to maintain a "athlete and client first" atmosphere to help them reach their fitness goals. Chris became the Head Athletic Trainer at Westfield High School in 2010 and began teaching First Aid, Injury Prevention, and Personal Fitness as an Adjunct Professor at Kean University. He is also a Clinical Instructor for the Athletic Training programs at Kean University, Montclair State University, and Seton Hall University. Chris has a passion and a gift for mentoring young trainers and sharing his experiences and acquired knowledge from over 17 years in the fitness industry.
Chris is also the creator of the Rooted Rehab Certification for Athletic Trainers. It teaches Athletic Trainers how to develop rehab programs for athletes by finding the root cause of the problem and not just addressing the symptoms.
He has also develop a Mindset Shift Program called FLO-OSOPHY, where he speaks to Athletic Programs, Coaches and does one on one training with people from around the world. To find out more about that program visit: https://floosophy.wixsite.com/floosophy​
No matter what goals you have set for yourself, Chris will be committed to helping you achieve and go beyond them!
Emal: flofitness@gmail.com
Twitter: flo_fitness
Instagram: flo_fitness 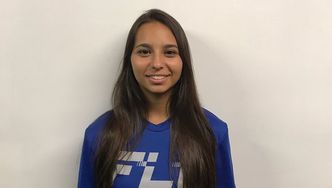 Lexie is currently a junior at Kean University studying Exercise Science. She has experience working with High School Athletes and coaching Soccer. Her goal is to some day travel the world sharing the message of fitness and wellness.  Lexie has a unique ability to connect with people and gain trust.  She is light hearted and always has a positive energy. Her life motto is, "Live in the moment". Lexie believes that life is a series of NOW.

Pawel graduated from Montclair State University with an Athletic Training degree. Pawel started off as an intern at FLO in May 2017. He also has a CrossFit Level 1 Certification and has been coaching CrossFit since December 2016. Pawel is looking to add Rooted Rehab, Stick Mobility, and Animal Flow certifications to his resume in the near future. His goal for the future is to own a facility similar to Flo Fitness that focus on performance, strength, and injury prevention for athletes. 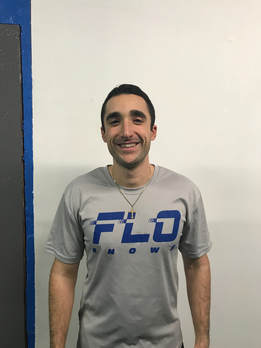 John Placca is currently a certified Athletic Trainer at Scotch Plains-Fanwood High School.  John received a Bachelor’s of Science degree in Athletic Training from Kean University and recently received his Master’s Degree  in Organizational Leadership from Rider University.  He has held a NCSF personal training certification since his days as an undergraduate student and has experience coaching and rehabilitating youth, high school, and collegiate athletes.  His future goals include continuing his education and becoming a mentor for future athletic and personal training students.  He strives to become a better version of himself each day and is always willing to help others grow with him. 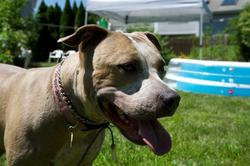 Roxy
Roxy is not your average dog. Roxy is passionate, energetic and loves everything fitness. When asked what she considers her passion to be Roxy responds "woof, roof!" which ruffly translates to "Helping humans get into magnificent athletic conditioning and ability." On her days off Roxy can be seen enjoying her favorite things, bones, treats, belly rubs and she especially enjoys cuddle time.